The successor to the original IBM PC and the subsequent PC XT, the AT (for Advanced Technology) saw the adoption of the Intel 80286 CPU (the original PC had used an 4.77MHz Intel 8088), higher capacity floppy disks (1.2MB) and a 20MB hard disk. This particular model was 'rescued' from a skip bes... (read more)IBM, 1984 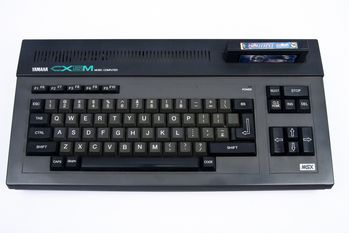 An example of a system based upon the MSX standard, launched in Japan in 1983. Supported by Microsoft, MSX was intended to do for home systems what the IBM PC standard was already doing in the business domain. Based around the popular Z80 CPU, a host of well-known consumer electronics companies ... (read more)Yamaha, 1984